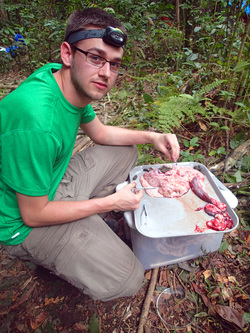 The mammalian gut microbiome is extremely complex and has been shown to be essential to host fitness and health, assisting in both nutrient acquisition from diet, as well as protection from pathogens. This community of microorganisms: bacteria, viruses, fungi, and even multicellular parasites, can all interact with each other and their host. In this talk, I will discuss the seasonal community composition of both cestodes and bacteria within the intestines of two North American shrew species, Sorex monticola and Sorex cinereus. Specimens were collected approximately every three weeks from May to October during 2016 and 2017 as well as during April and May of 2018 and September of 2009 from the Sangre de Cristo Mountains in Cowles,New Mexico. A total of 186 shrews were dissected and surveyed for cestode and bacterial taxa. Bacterial and cestode communities were estimated based on next generation ampliconsequencing of 16S rDNA (for bacteria) and 28S rDNA (for cestodes).