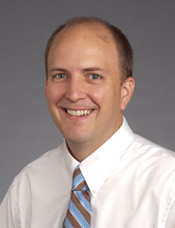 Aubrey Turner graduated from UNCG in 1996 with a B.S. in Biology. While at UNCG, he worked as a student intern in the lab of Dr. Vince Henrich, where he learned how to do RFLP mapping of the ECD gene in Drosophila. That experience prepared him well for his first job after graduation, as a lab technician at Wake Forest University School of Medicine. During two years at WFUSM, he refined a method to detect and quantify parvovirus based on a unique DNA signature; his data fit within a larger project looking at the effects of parvovirus at different timepoints in pregnancy. He then pursued an M.S. in Genetic Counseling at the University of South Carolina, where he was trained to provide risk assessment and counseling services to patients in a variety of clinical settings. His Master’s thesis compared visual versus numeric methods to communicate risk information to patients. After graduating from U of SC in 2000, he was hired as a clinical genetic counselor at WFUSM, where he has remained for 13 years. After spending his first year working primarily in prenatal and pediatric clinics, he gradually migrated into a research role within the Center for Human Genomics. He has coordinated many studies of prostate cancer genetics, and has also done some work in other common cancers such as breast, colon, and lung. Aubrey has done everything from recruiting patients via mail and phone, to data analysis, to writing grant applications and manuscripts. He has been a co-author on manuscripts published in NEJM, Nature Genetics, and JNCI. His current project has returned him to his genetic counseling roots, by providing results of a prostate cancer genetic test to at-risk men, and assessing changes in anxiety levels, risk perception, and cancer screening behaviors. While continuing to work, Aubrey also been pursuing his PhD at WFUSM, and hopes to be finishing up his degree in about a year. So far Aubrey’s career has been interesting and he could have never imagined how it would all play out. He remains truly thankful for the opportunity to build a strong foundation during his years at UNCG.