This award was established by the family of Dr. Bruce M. Eberhart to honor exceptional students in the Biology Department who are academically excellent, actively involved in research, and demonstrate significant extracurricular contributions or service to the department, the university, the community as a whole, and even to fellow species they share the planet with. The award was established in 1997 to honor the memory and many contributions of Dr. Eberhart, a cancer victim, to the Biology Department and the community by honoring the students who are contributing to the department and the community in ways that were typical of him. The award is presented to graduating senior biology students and consists of a cash honorarium and a book, which is chosen to repersent contributions to science and humanity by outstanding individuals or biological scientists. This serves, then, as an inspiration to young biological scientists just starting in their careers. The Eberhart Award fund provides not only the cash honoraria but also scholarship support for undergraduate research. The book presented to the Eberhart Award winner in 2014 was Missing Microbes subtitled How the Overuse of Antibiotics is Fueling Our Modern Plagues by Martin J. Blaser. Dr. Blaser’s warnings about the use/misuse of antibiotics are taking a broad view that biology students especially appreciate and these issues are definitely what Dr. Eberhart would have been concerned about, thus this was the volume chosen for the award winners.

The Eberhart Award winners for 2014 were: 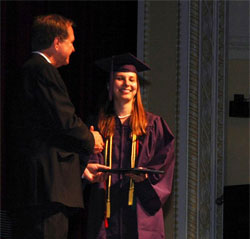 Jessica Suzanne Anderson – a member of the Beta Beta Beta national honor society in biology. She will be attending veterinary school at Kansas State University in the fall. She has been a research assistant in the laboratory of Dr. Matina Kalcounis-Rueppel, contributing to the research activity of the Biology Department. She has an outstanding record, in addition to her academic achievements, of service to both her own species and to other species. Jessica helps care for sick, injured, and orphaned wildlife at local vets and works at the Wildlife Rehab Center of the North Carolina Zoo. For her own species she tutors her fellow students in Biology without charge and volunteers her time to teach Hispanic students to read and write Spanish. 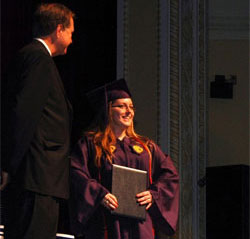 Kimber Brooke Corson – a member of the Beta Beta Beta national honor society in biology. She is a member of the UNCG Biology Club which is notable for service activities. She has worked as an undergraduate research assistant in the laboratory of Dr. Anne Hershey for three years contributing to field research activities literally all over the country as a UNCG Office of Undergraduate Research awardee. She has volunteered for the Science Olympiad which encourages young secondary school students to be active in and compete for awards in science and she has volunteered for the American Red Cross. 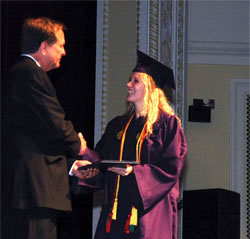 Carissa Rose Hill – a member of the Beta Beta Beta national honor society in biology. She has worked for the past year as a student research assistant in the laboratory of Dr. Paul Steimle. Her research results in that short period of time resulted in a poster presentation at a meeting of a national research society. She has been working as a certified nurse’s assistant throughout her college career, both at Durham .Regional and most recently at Cone Hospital. One of her nominators exclaimed that she blended strong academic performance with a really terrific attitude! 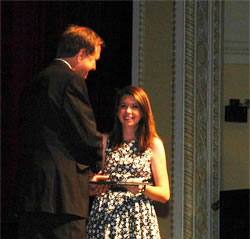 Ashley Anne LaVere – a member of the Beta Beta Beta national honor society in biology. She has been a research assistant and field worker for the North Carolina Box Turtle Project, Ephemeral Pools Project, and the Sea Turtle Conservancy in Costa Rica. She has volunteered at the Karen Beasley Sea Turtle Hospital in Surf City, North Carolina, the Natural Science Center in Greensboro, North Carolina, and at the Union Hill Elementary School in High Point, North Carolina. Finally, she was one of the major student organizers in a recent student-run campus symposium on environmental stewardship and sustainability.