This award was established by the family of Dr. Bruce M. Eberhart to honor exceptional students in the Biology Department who are academically excellent, actively involved in research, and demonstrate significant extracurricular contributions or service to the department, the university, the community as a whole, and even to fellow species they share the planet with. The award was established in 1997 to honor the memory and many contributions of Dr. Eberhart, a cancer victim, to the Biology Department and the community by honoring the students who are contributing to the department and the community in ways that were typical of him. The award is presented to graduating senior biology students and consists of a cash honorarium and a book, which is chosen to repersent contributions to science and humanity by outstanding individuals or biological scientists. This serves, then, as an inspiration to young biological scientists just starting in their careers. The Eberhart Award fund provides not only the cash honoraria but also scholarship support for undergraduate research. The book presented to the Eberhart Award winners in 2012 was The Immortal Life of Henrietta Lacks by Rebecca Skloot. From the book’s dustjacket we learn that, “Doctors took her cells without asking. Those cells never died. They launched a medical revolution and a multimillion-dollar industry. More than twenty years later her children found out.” The issues about medical and scientific ethics raised by this book are definitely what Dr. Eberhart would have been concerned about and thus this was the volume chosen for the award winners.

The Eberhart Award winners for 2012 were: 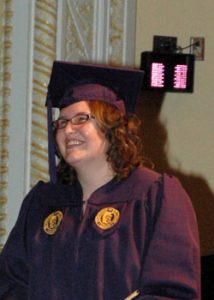 Zoe Rebecca Goldstone – is a member of the UNCG Biology Club which sponsors many service activities, such as stream cleanup, volunteering in hospitals and animal shelters. She has been a Resident Advisor in the UNCG dorms requiring a high level of responsibility and dedication to the well-being of as many as 300 students. She has a strong commitment to environmental conservation and environmental education. She was an Environmental Resources Intern at the Kathleen Clay Edwards Family Branch Library of the Greensboro Public Library system. Zoe spent a great deal of time organizing and literally building the internship program, being the first one, to guide all student interns who will follow in the program. She volunteered at the Karen Beasley Sea Turtle Hospital at Wilmington one summer and was active with maintenance, rescue operations, and conservation education. She has been a YMCA counselor for after school programs and volunteered at the Deaf Hearing Community Club. And, after doing all the above, she relaxes by playing ice hockey at the Ice Ventures Rink in Greensboro where also works part-time. 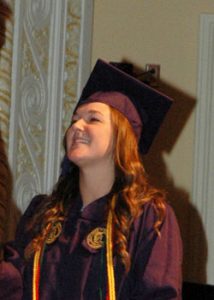 Emily Cecilia Mason – is secretary of the Beta Beta Beta biology honor society. She has been a research assistant for Dr. Bruce Kirchoff. She completed an impressive research project where she constructed a visual key for the trees on campus. Just go to UNCG library web site to see her impressive multilevel work. She has been a volunteer for the Science Olympiad, volunteered to be a Seafood Watch advocate to inform people about buying and consuming sustainable seafood, has been a volunteer for Sea Turtle conservation both at the Karen Beasley Sea Turtle Hospital at Wilmington and at the Sea Turtle Conservancy in Costa Rica, and is a volunteer at the Conservator’s Center in Mebane where she, in her own words, “prepared meals, cleaned enclosures, and fed the lions, tigers, wolves, leopards, and New Guinea singing dogs.” Dr. Kirchoff summed up his nomination of her with, “Through all of my interactions with Ms. Mason I have been struck not just by her intelligence and hard work, but by her humility and almost self-effacing nature.” 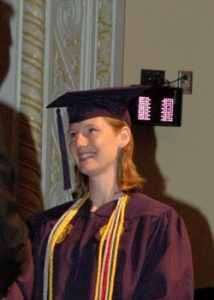 Ashley Shane Williams – is a member of the Beta Beta Beta biological honor society. I was first introduced to her when she was a student in one of my lab classes and I learned of her activities with the Office of Leadership and Service Learning (OLSL) at UNCG. She mentioned that she had been in New Orleans helping out in the poorer sections of town that were devastated by Hurricane Katrina. She went on to be a project leader for the OLSL for volunteers at the Karen Beasley Sea Turtle Hospital in Wilmington. She could be seen often in the student lounge tutoring students in introductory biology courses for the Office of Special Support Services, rated a Master Tutor. She has been a tree planting volunteer on campus and is active in the Dan River Basin Association as an intern for local watershed and forest planning. And she was an undergraduate research assistant in Dr. Parke Rublee’s laboratory doing advanced work on detection of possible harmful microorganisms in lakes and water systems affected by human use. She is eminently qualified for this as she is a certified Open Water Diver.