This award was established by the family of Dr. Bruce Eberhart to honor exceptional students in the Biology Department who are academically excellent, actively involved in research, and demonstrate significant extracurricular contributions or service to the department, the university, the community as a whole, and even to fellow species they share the planet with. The award was established in 1997 to honor the memory and many contributions of Dr. Eberhart to the Biology Department by honoring the students who are contributing to the department and the community in ways that were typical of him. The award is presented to graduating senior biology students and consists of a cash honorarium and a book, which is chosen to repersent contributions to science and humanity by outstanding biological scientists. The serves, then, as an inspiration to young biological scientists just starting in their careers. The Eberhart Award fund provides not only the cash honoraria but also scholarship support for undergraduate research. The book presented to the Eberhart Award winners in 2010 was The Art and Politics of Science by Harold Varmus. He is president of the Memorial Sloan-Kettering Cancer Center. The book’s dust jacket states that, “Harold Varmus is a global scientist-statesman who bridges science and society to solve the weightiest global challenges.”

The Eberhart Award winners for 2010 were: 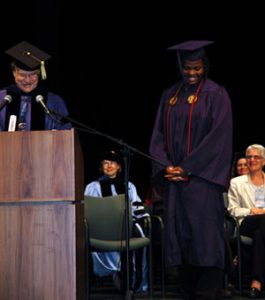 Angelica Chaney-Berkley – the secretary of, and an active member of, the UNCG student group Health Occuptations Students of America or HOSA. This exemplary group of students seeks to enhance their experience in health care fields by volunteering their services where needed in local clinics and hospitals. She was the secretary of Beta Beta Beta, the national biological honor society. She did research in the laboratory of Dr. Karen Katula and presented it at the 2010 meeting of the North Carolina Academy of Science. 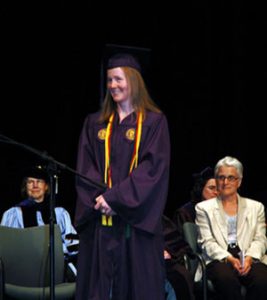 Melanie Stadler – represents the biology students who are concerned about, and provide service to, species other than their own. She is a tireless worker for sea turtle conservation, having volunteered at the Karen Beasley Sea Turtle Hospital on Topsail Island, NC. This spring she served as an intern at the Karen Beasley Hospital, putting in many more hours than those required of an intern. She has been instrumental in helping to support the Sea Turtle Conservation course of Mrs. Ann Somers, providing support to Mrs. Somers and fellow students for the activities of the course. She was very helpful in volunteering to provide support for the Biology Department Sustainability Symposium and she is also a member of Beta Beta Beta, the national biological honor society.