This award was established by the family of Dr. Bruce M. Eberhart to honor exceptional students in the Biology Department who are academically excellent, actively involved in research, and demonstrate significant extracurricular contributions or service to the department, the university, the community as a whole, and even to fellow species they share the planet with. The award was established in 1997 to honor the memory and many contributions of Dr. Eberhart, a cancer victim, to the Biology Department and the community by honoring the students who are contributing to the department and the community in ways that were typical of him. The award is presented to graduating senior biology students and consists of a cash honorarium and a book, which is chosen to represent contributions to science and humanity by outstanding individuals or biological scientists. This serves, then, as an inspiration to young biological scientists just starting in their careers. The Eberhart Award fund provides not only the cash honoraria but also scholarship support for undergraduate research. The book presented to the Eberhart Award winners in 2017 was I Contain Multitudes by Ed Yong, an award-winning science writer who’s work has appeared in the New York Times, Scientific American, and the prestigious scientific journal Nature.  This book describes literally a “microbe’s-eye view” of the world based on recent research in this area.  From the dust jacket, “many people think of microbes as germs to be eradicated, but those that live with us—the microbiome—are invaluable parts of our lives.”  Dr. Eberhart, with his broad interests, would have been deeply involved in these issues and that makes this book most suitable for the Eberhart Award winners this year.

The 2017 Eberhart Award winners were:

Chianti Anjoneé Brooks — a member of Beta Beta Beta national honor society in biology. She is a pre-med post-baccalaureate.  She is an excellent, serious, and kind student.  She has been working diligently with Dr. Amy Adamson and has become an excellent researcher.  Her project’s goal was to develop a quantitative genomic approach to quantify EBV lytic replication, and required her to master advanced molecular techniques including DNA isolation, PCR, and quantitative PCR.  Such approaches require high attention to detail, which Chianti definitely has displayed.  Her project has been a success!  The protocol that she has designed will be invaluable to their lab’s future research.  In addition to her superb academic record and lab research, Chianti works with the Veteran’s Resource Center on UNCG’s campus.  She has been a real asset to Dr. Adamson’s lab, the Biology department, and the campus as a whole.

Kyla Jacqueline Smith-Honoré – a member of the Beta Beta Beta national honor society in biology and minoring in Spanish and Chemistry.  She is doing research on Epstein-Barr virus and their cell signaling proteins with Dr. Amy Adamson.  This work has strongly contributed to research on this virus in Dr. Adamson’s laboratory.  In addition to her contributing to the research efforts of the Biology Department, she has an outstanding record of volunteering and service.  She is the treasurer of the Minority Association of Pre-Med students, is an active member of the Health Occupational Students of America, and is a certified Levels 1 and 2 Spanish tutor at UNCG. Furthermore, she volunteers at Wesley Long Hospital in Greensboro, working as a habilitation technician.  In Raleigh Kyla has served with the Salvation Army’s Annual Toy Drive for Christmas.  Quoting from her nomination letter, “And everything Kyla does is done with a smile!”

Babak Yousefi – a member of Beta Beta Beta national honor society in biology.  He has worked in the laboratory of Dr. Olav Rueppell as an undergraduate researcher for four years.  He has worked on diverse aspects of the biology of honeybees from behavior under stress to gene expression assessments through quantitative molecular Polymerase Chain Reactions (PCR).  He has presented this work at regional science conferences and has written a disciplinary honors thesis on this work.  Oh, yes, and it is now being published in a refereed scientific journal.  However, he has established an outstanding record of service too.  He founded the student Pre-Dental club at UNCG for students studying to pursue a career in dentistry.  The club has organized regular student meetings and clinics.  In addition, the club under his leadership has participated in a service outreach activity to map affordable dental care for low income residents of several counties in North Carolina. 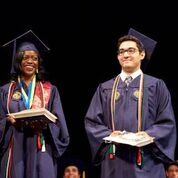