Parkinson’s disease (PD) is a neurodegenerative disease characterized by the death of dopaminergic neurons and α-synuclein (Asyn) aggregation in the form of Lewy Bodies in the brain. Literature hypothesizes that an environmental agent could act on non-neuronal cells in the nasopharyngeal tract to induce the early stages of Sporadic PD, by initiating cellular dysfunction. We propose that Epstein-Barr virus (EBV) has the potential to influence neurological disease development, based on clinical evidence of Parkinsonism in tandem with high EBV loads. The virus is associated with nasopharyngeal carcinomas, and it has been implicated in clinical cases of multiple sclerosis, encephalitis, and other neurological conditions. EBV is widespread with over 90% of people across the globe carrying the virus, and its control of autophagic processes in the cell may be crucial for PD progression and DA cell health. EBV can infect astrocytes, microglia, monocytes, macrophages, and B cells,  and can enter the Central Nervous System (CNS), but little is known about the interactions between neuronal cells and EBV, or what their consequences are for neurodegenerative diseases.  With our approach we chemically differentiate Sh-sy5y neuroblastoma cells to display a dopaminergic phenotype. These cells are then exposed to EBV. We have successfully infected these dopaminergic cells and will use them to study viral entry, as well as EBV’s manipulation of autophagy, as this is a key factor in the development of neurodegenerative diseases. These experiments will elucidate EBV-host interactions in neuronal cells that can affect molecular mechanisms that influence not only neurodegenerative diseases but overall cell health. Our discoveries can further our understanding of EBV as a neurotropic virus in clinical and research settings to facilitate drug development and expand the scope of neurodegenerative and virologic studies. 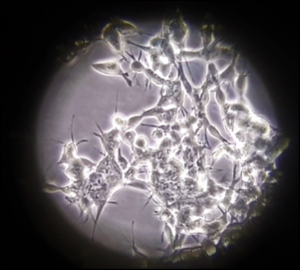 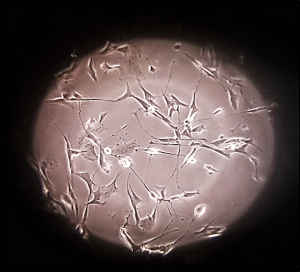